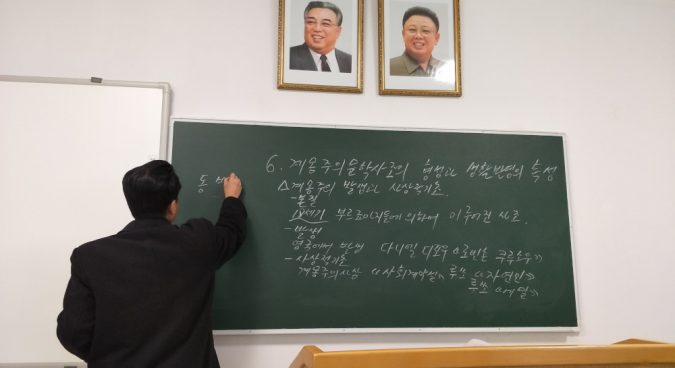 Let the Light in

Let the Light in is a documentary rooted in the lives of ordinary students studying under the most extraordinary of circumstances: international students at Kim Il Sung University in Pyongyang, North Korea. The film unfolds from the perspective of Alek Sigley, one of only three Western international students inside a country virtually unknown to the outside world. Granted unprecedented access to move freely through the streets and subways of Pyongyang with a student visa, Alek processes the world around him by filming and photographing as he and his friend Howard explore their neighborhood, interact with locals and interview each other in their dorm room. Alek posts seemingly simple material, a restaurant review, the centerfold of a men’s fashion magazine, and dedicated a detailed comparison of North Korean-made breakfast cereals in an effort to counter what he considers dehumanizing stereotypes of North Korea and its people. He quickly develops a following of people hungry for a glimpse inside this unknown society. Suddenly, on June 25, 2019, Alek loses touch with the outside world and his online presence goes dark. Fearing the worst, family, friends, international media and the Australian government grasp for an answer: “Has Alek been arrested? Is he safe? Where is Alek?” After nine days, Alek appears in Beijing airport, smiling and unharmed, but permanently expelled from the country with which he has dedicated so many years to building bridges. Let the Light in is a deep voyage into the experiences and motivations for Alek’s studies and actions in North Korea. Using observational filming, interviews, as well as never-before-seen footage and photographs gathered by Alek in Pyongyang, the film unpacks Alek’s philosophy of engaging with North Korea as well as how it has changed over time and continues to evolve. The film asks, “How can the experiences of international students like Alek expose the cracks in this closed society to let the light in?”​

Before I met Alek several years ago, I had never met anyone who had been to North Korea. I could not believe it - not only had he travelled to this mysterious country, he had started a business offering tourists a North Korea experience that was centered on language and a cultural exchange. He even married his Japanese wife in Pyongyang. It is clear that Alek’s connection to North Korea is deeply rooted. I followed Alek on social media and began to see glimpses of this mysterious country through the pictures of his tours. Soon, though, the imagery became familiar and began to repeat the same statues, buildings and vantage points from a staged and consistent journey that all tourists take through Pyongyang. However, the images he posted shifted when Alek later entered Pyongyang as a student. The details he exposed offered a unique view into an otherwise completely closed society. Alek quickly became the most followed (and only) Twitter user posting from inside the DPRK; I was hooked. I have always wanted to document Alek’s unique access and how he used it.​