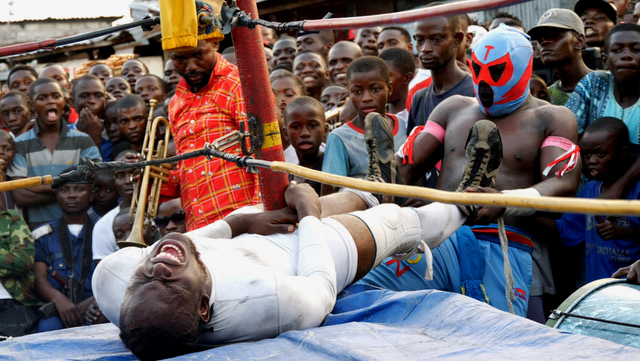 On weekends, a parade moves through the city streets, bringing out people to dance and cheer. A wrestler defeats his enemies with “black magic,” a female wrestler distracts her male opponents with her sexual hip dance. Ten-year-old Kankubi survives off of scraps in the marketplace. Driven by anger towards her mother, she sees the ring as her best chance for independence and happiness. Wrestling is a source of support and strength for both Kankubi along with the people who gather to watch – prostitutes, street children, and drug addicts. Despite their poverty and extreme hardships, the Congolese people find hope through the wrestlers and a ring that unites them all. Kankubi feels connected to Masia, a wrestler who discovered wrestling as an orphan in the streets, giving meaning to his life as it does for his friends and family. With wrestlers earning less than one dollar per match, his wife Nadia constantly urges him to quit and find a job that can support his family; however, he is not ready to give up. Masia’s team has high hopes of hosting an international match in Kinshasa, featuring wrestlers from America, France, and Belgium.​

Arriving in the DR-Congo, director Naoki Uchiyama encountered a very different reality from what he had imagined. “How could wrestling develop such a rich culture and following in this poor country?” he wondered. Captivated and intrigued, Naoki set out to search for an answer. Filming began in October 2017 with complete cooperation from the local wrestling club. While there, he became compelled to share the stories of a wrestler named Masia and an impoverished young girl named Kankubi. Despite being so young, Kankubi suffered with anger and sorrow, but saw a way out of her despair through wrestling and her bond with Masia. The director was touched and inspired by the interactions of these two as well as by the dream of the local wrestlers to host an international match in Kinshasa, creating a place for the world to come together. After returning to Japan, Naoki began developing a project about these wrestlers and their ability to find hope and strength even in the harshest times.​