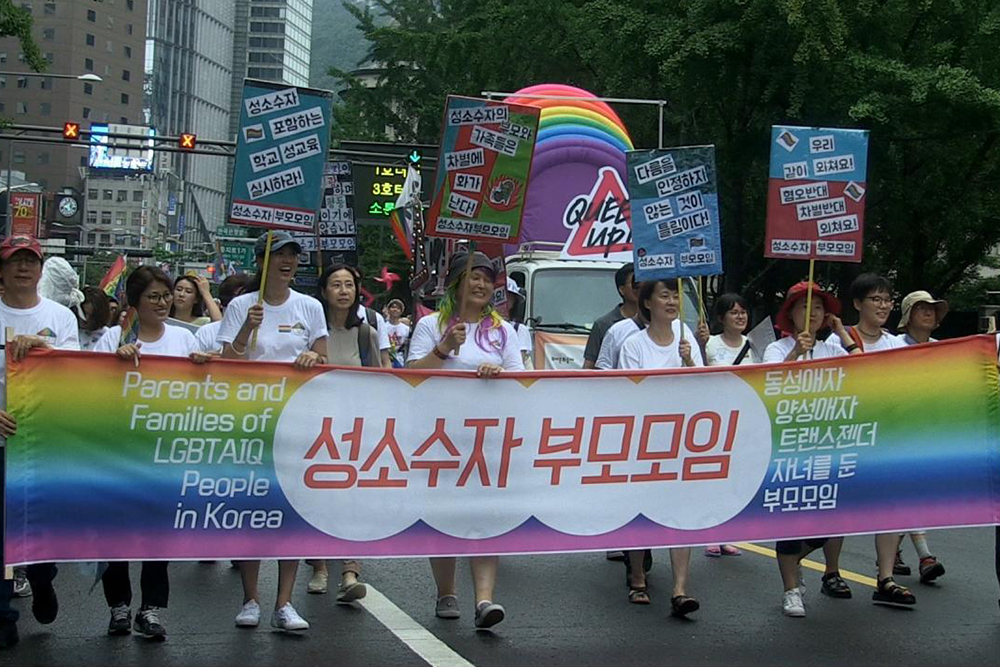 I Hate and I Love(Working Title)
IMPACT GOALS

Highlighting the ‘existence’ of the LGBTQIA community has been a significant agenda of Korea’s LGBTQIA activism. This still stands as a valid slogan and when it is presented through specific aspects of life, it helps one to contemplate on a deeper level what it means to ‘live together.’ The stories of living each day along with others as a woman, as someone’s ‘mother,’ and as a family member, allows the audience to have the opportunity to rethink the idea of existence and relationships.

Nabi and Vivian are the members of ‘The Parents, Families and Friends of Lesbians and Gays’ in South Korea. They stand up for equality for sexual minorities, help parents of LGBT children, attend the queer parade, and speak in public. However, having grown up in the Korean traditional family, they’re also accustomed to the culture that the mother must have full responsibility for their children. For them, it’s not easy to understand their children perfectly. Experiencing non-stop fights with their children, two mothers are wondering how they can forge better relationships with their children, person to person. 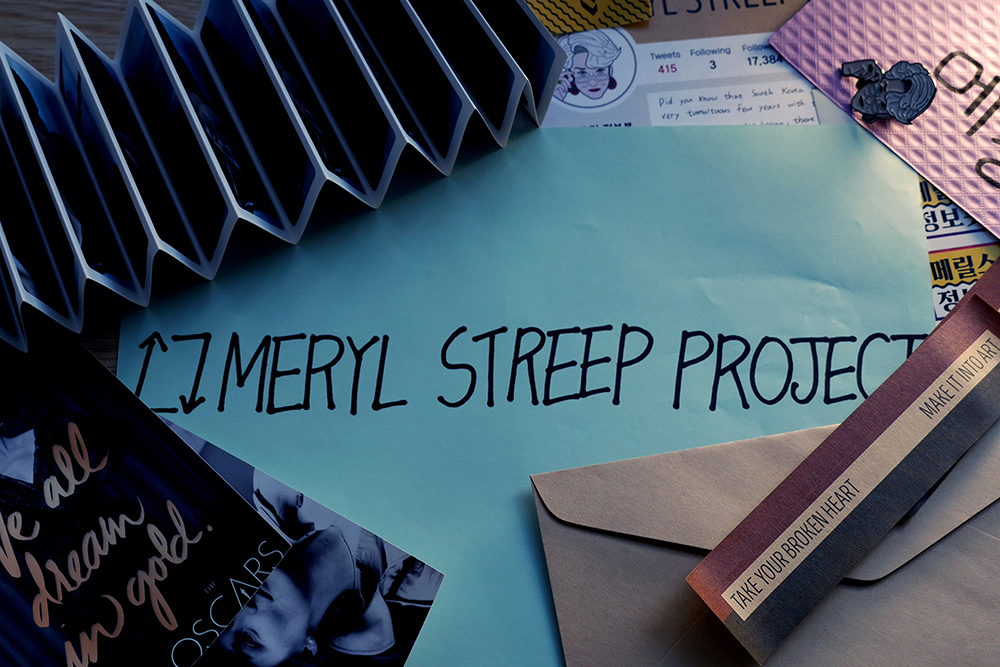 By shining a light on the new wave of Korean feminism through the various cross-generational and cross-cultural movements, we hope to inspire positive change.

October 2016, artists take to Twitter to report sexual harassment cases within the film industry. After much thought, Hyosun begins the hashtag “#sexual_harrassment_within_film_industry” and starts a collective of feminist filmmakers called ‘Shooting Femi.’ Hyosun had already begun a twitter account introducing Meryl Streep’s works to encourage her peers, and discovers that Meryl’s words and actions resonated with Korean feminists of all ages and backgrounds. She realizes this is the time to actualize her dream project - The Meryl Streep Project. But the goal is different this time. The dream to meet Meryl is not coming from one fan, but from a cross-generational community of feminist filmmakers. Hyosun interviews more than a hundred Korean filmmakers on the forefront of rebooting the feminist movement in Korea and plans to share these stories with Meryl. Hyosun gains renewed energy when to her surprise, her crowdfunding campaign gathers enormous enthusiasm and rapidly reaches its funding goal. All seems to go well and she’s closer to her goal than ever before, but soon unexpected events start to unfold. Will Hyosun finally meet Meryl Streep? 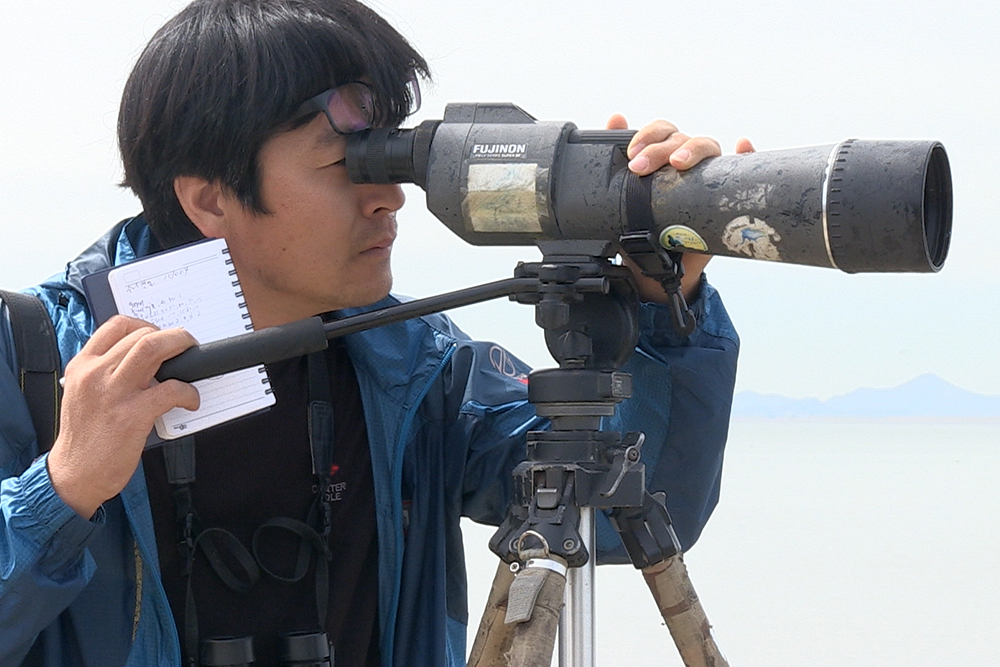 I am the Sea
IMPACT GOALS

We hope this film will rekindle another debate on the ‘Saemangeum project’ within Korean society and contribute to the restoration of the mudflats.

On the first weekend of every month, there are those who gather at ‘Saemangeum’ without fail. They are members of Saemangeum civil investigation group. Ranging from carpenters, students, anthropologists, writers and farmers, the group is comprised of a wide variety of people of all ages, jobs and places. For 17 years, every month, the group has been voluntarily observing and investigating the lives of birds and citizens in Saemangeum. It has been looking into, listening to, and documenting what happened to clams and birds in mudflats, as well as the residents after a huge 33.9 km seawall closed off the estuary from the Mangyeong and Dongjin rivers. The truth behind ambitious blueprints promoted by the government and developers have remained -tens of thousands of photos, voice recordings of people in a fishing village, journals full of memos and volumes of thick reports. Poor citizens have silently left those significant records, which were not created by scholars or experts. This film is about the recordings and memories of people in Saemangeum civil investigation group who are eyewitnesses of Saemangeum. This film unfolds a sad but beautiful story of birds and people who would have disappeared from history if it were not for their memories and documents. 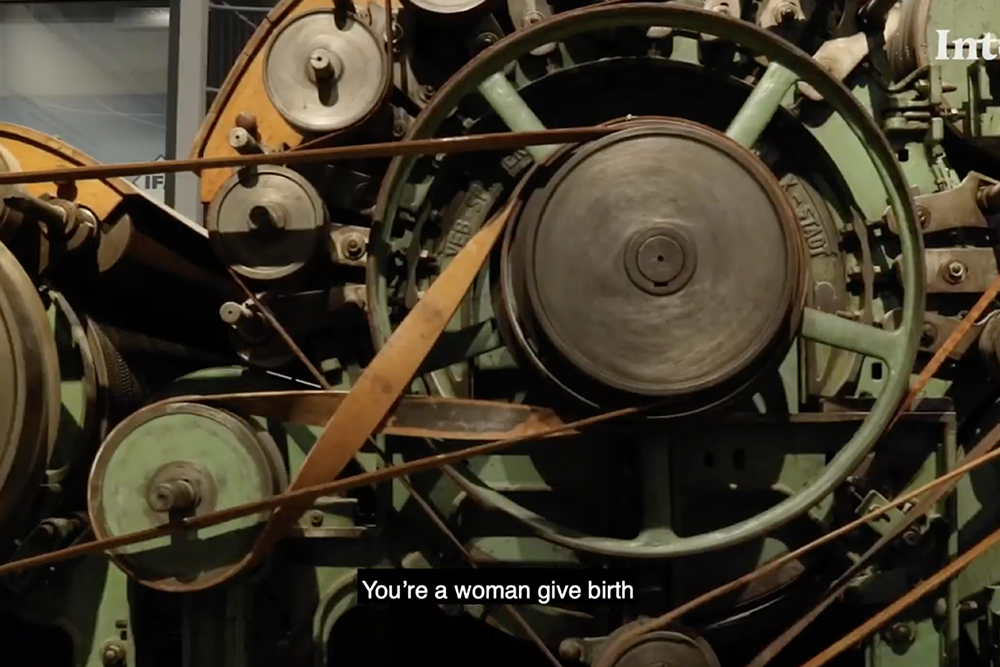 Our cinematic project aims to situate the ‘I’ at the center, through both the film and offline events, representing the global warming issue as a familiar, intimate one.

Is the climate crisis a matter of storytelling? The director of this film embarks on a search for ‘the protagonist of the climate crisis,’ and unwittingly becomes the protagonist in her own film, although not quite the figure she imagined she would be. Is the climate crisis a matter of storytelling? If people like Greta Thunberg feature as the protagonists of media storytelling, can they save the world like Marvel heroes? Director Kang Haeryun is a member of the vulnerable and beautiful Naive Tribe, who still believe in the power of media narratives to change the world. She is a 30-something woman living in the Itaewon neighborhood in Seoul, South Korea. She is sincerely concerned about the ethics of having a child in the age of climate change, and a few hours later, orders fried chicken with her husband for dinner. Don’t doubt her sincerity though, as she earnestly interviews people who may be the next big protagonist: Kyunghee, a farmer who raises 800 chickens; Greenpeace and Amnesty International activists; scientists who suffer from depression. Kang looks for the Right Face, interweaved with musings on human hypocrisy, imagination, hope and despair and along the filmmaking journey, finds herself the unwitting protagonist, although it’s not quite what she imagined it would be. She looks for children of climate change, only to realize that she is one. 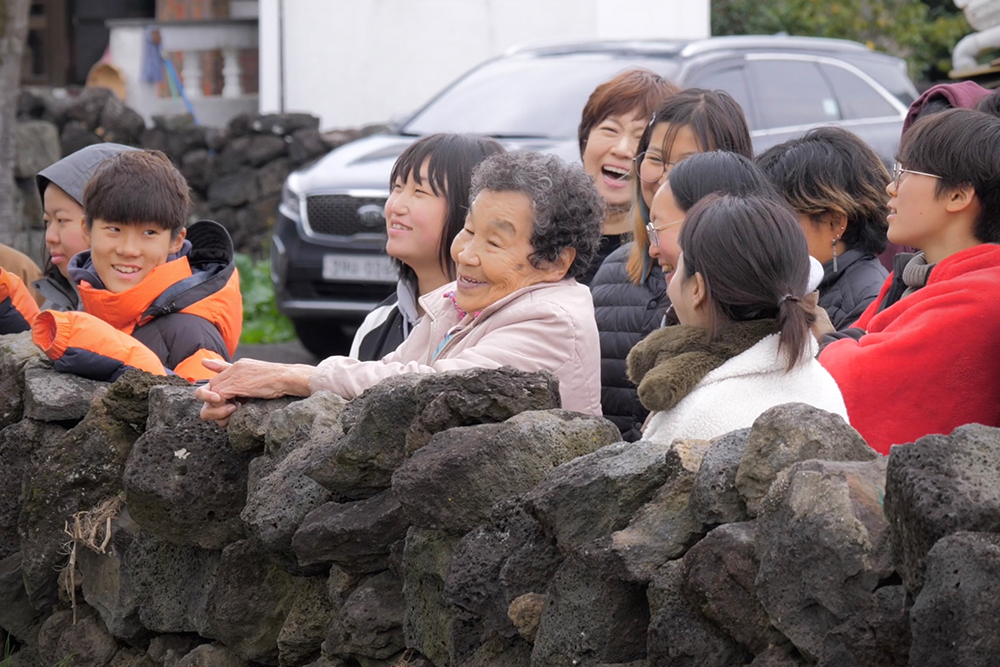 To reconsider awareness regarding social disaster and motivate the audience-public. Inspiring public cooperation and policy change within a civil society.

An artist builds schools at the sites of disaster after experiencing disasters herself. In 2006, Choi Soyeon and her colleagues attract public attention when they opened a self-powered art space called ‘Take-out Drawing.’ Finally settling down in Hannam-dong after losing their venues several times, they once again get hit by a wave of gentrification. Choi Soyeon who participated in the struggle as an artist won a small victory with the help of a group of researchers, writers and activists, but in the end, she was forced to close ‘Take-out Drawing’ for good. Weary of having to deal with one disaster after another, she moves to Jeju Island, but even Jeju wasn’t the refuge she hoped it would be. She only witnessed how the entire world was simultaneously haunted by disaster and how it worked its way into the life of every individual. “If we do not learn from disaster, we cannot survive.” Choi Soyeon decided to build schools at the very sites of disaster. She opened disaster schools at neighborhood bookstores and flower shops forced out of business due to the greed of building owners, at refugee gatherings, and with Jeju teenagers. Can these disaster schools help us find a way out of these disasters? 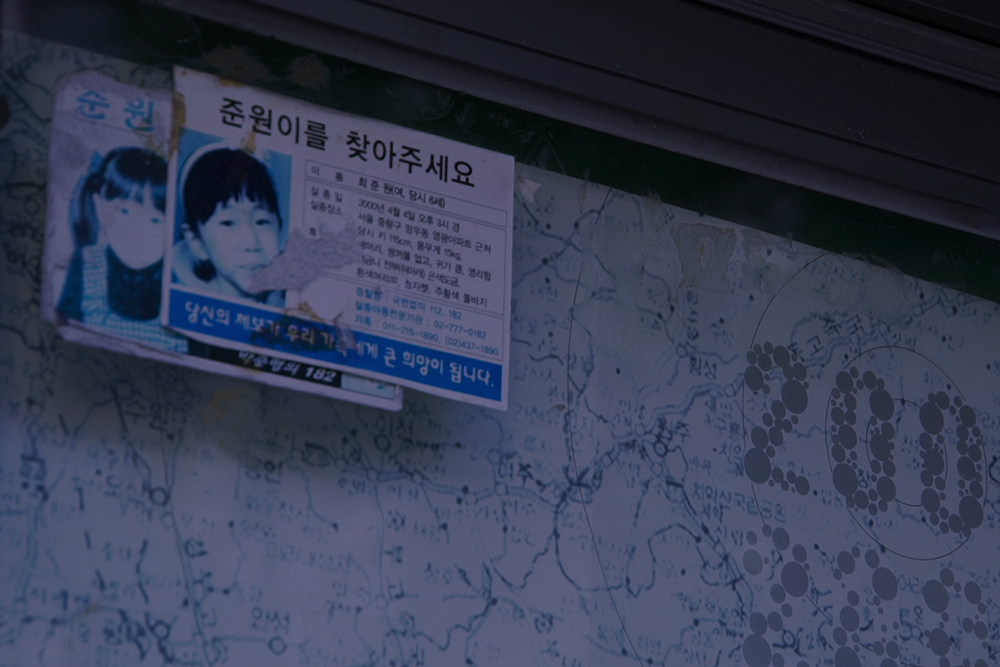 On April 4th, 2000, Joonwon, Choi Yongjin’s second daughter, disappeared from a playground near her home. As time passes, the father’s desperation to find Joonwon turns into guilt of failing to protect her. Meanwhile, Joonsun, his first daughter, watches her family’s tragedy in silence, and still cannot leave her father’s side even as an adult. Due to the fifth volume of Choi’s investigation notes that he wrote while chasing Joonwon, an unexpected witness appears, which prompts the police to reinvestigate the case seventeen years after the disappearance. With a glimmer of hope to find Joonwon, a subtle tension arises between Joonsun and her father. 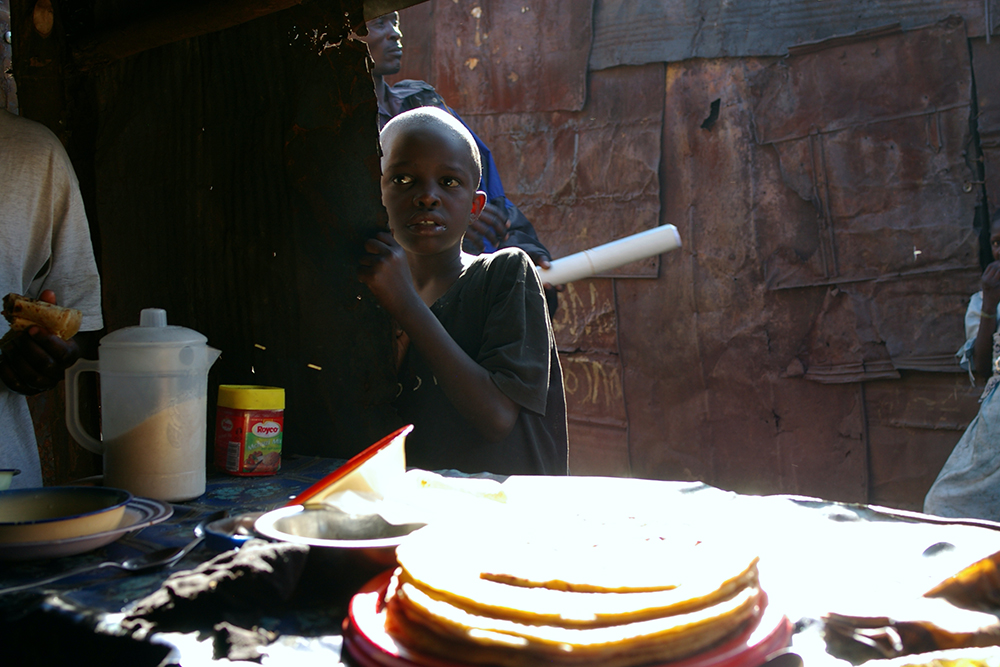 We are looking forward to an impact documentary film which is different from typical documentaries, one that inspires sympathy and compassion to make people donate. The ultimate goal is to make the audience sincerely empathize with the pain that numerous people around the world are suffering from: poverty, social discrimination, isolation, war, and so on.

This is a musical documentary film that focuses on curing the isolation and suffering children experience in society. Violist Richard Yongjae O’NEILL visits isolated and poor sites in eight different countries. Those places include child labor sites, slums, and refugee camps - where there are people who suffer from poverty, disability, disease, and discrimination. We meet the organizations doing charity work here to meet volunteers, examine the reality and difficulties faced by the village, and talk about their needs. Then, we meet a boy with outstanding musical talent in the village, and have conversations along with the music. The story of the boy, musical performances, and Richard’s story and performance are shared, to convey each other’s feelings. Through Richard’s visit and offering condolences to those who are in pain somewhere in the world, audiences suffering from the pandemic and economic downturns sweeping the world are comforted as well.